​​​Your favorite YA authors including Ellen Hopkins, Maureen Johnson, and more recount their own experiences with mental illness in this raw, real, and powerful collection of essays that explores everything from ADD to PTSD.

Have you ever felt like you just couldn't get out of bed? Not the occasional morning, but every day? Do you find yourself listening to a voice in your head that says "you're not good enough," "not good-looking enough," "not thin enough," "not smart enough"? Have you ever found yourself unable to do homework or pay attention in class unless everything is "just so" on your desk? Everyone has had days like that, but what if you have them every day?

You're not alone. Millions of people are going through similar things. However, issues around mental health still tend to be treated as something shrouded in shame or discussed in whispers. It’s easier to have a broken bone—something tangible that can be “fixed”—than to have a mental illness, and easier to have a discussion about sex then it is to have one about mental health.

LIFE INSIDE MY MIND is an anthology of true life events from writers of this generation, for this generation. These essays tackle everything from neurodiversity to addiction to OCD to PTSD and much more. These authors want to show their fans, that they are not alone; that you don’t have to feel helpless as you witness a friend or family member struggle, and, perhaps, they can start a conversation.

★ 02/26/2018
Renowned writers of fiction and nonfiction candidly speak out about their experiences with often stigmatized mental illnesses, including agoraphobia, OCD, Alzheimer’s, bipolar disorder, PTSD, and depression and anxiety, which frequently go hand in hand. Some of the authors focus on what it is like to be in their shoes, such as editor-poet E.K. Anderson, who expresses her experience with bipolar disorder entirely in verse, and Megan Kelley Hall, who details her suffering in her essay “My Depression—A Rock and a Hard Place.” More often than not, however, the aims of the authors—who include Ellen Hopkins, Francisco X. Stork, Maureen Johnson, Sara Zarr, and many others—are to help readers, advising them on where to turn for help and advocating for a society that is more sensitive and informed about mental and emotional health. Author Tara Kelly provides a concrete list of tips ranging from medication to stargazing to help relieve symptoms of acute anxiety. These bold, brave essays will educate the uninformed and inspire hope in those who may feel alone in their suffering. Ages 14–up. Agent: Bethany Buck with Edward Maxwell, Sanford J. Greenburger Associates. (Apr.)

Ellen Hopkins, Lauren Oliver, Francisco X. Stork, Sara Zarr, and the other 27 contributors to this anthology are all best-selling, award-winning authors. Yet many admit that their personal essay on mental illness was the hardest piece they’ve ever written. Although a few authors write about friends and family, most reveal their own struggles with anxiety, depression, addiction, OCD, ADHD, PTSD, bipolar disorder, body-image issues, and more, with cutting and suicidal thoughts often entering the picture. The contributors explain how the mental illness first manifested itself and eventually took over their lives. Their essays (and one poem) are raw, intense, and poignant. Individually, they show a wide range of experiences; collectively, they show commonalities among sufferers. There are feelings of isolation, shame, being stigmatized, and losing control as “it” or a “monster” seemingly guides their thoughts and actions. Nevertheless, hope and recovery also shine through as the authors reflect on their self-care and coping mechanisms, including therapy, medication, meditation, exercise, sleep, and diet. Just like mental illness itself, the paths to acceptance and recovery take many forms. Who better to raise teens’ awareness of mental illness and health than the YA authors they admire? Their compelling stories will start important discussions and assure readers they’re never alone. — Angela Leeper

★ 02/01/2018
Gr 9 Up—In this much-needed, enlightening book, 31 young adult authors write candidly about mental health crises, either their own or that of someone very close to them. Ranging from humorous to heartbreaking to hopeful, each story has a uniquely individual approach to the set of circumstances that the writer is dealing with. Many authors address readers in the second person, inviting them to imagine what it's like to live a day inside their heads. The symptoms of anxiety, depression, obsessive-compulsive disorder, and addiction are frequently discussed. Readers will learn of the many different ways these conditions can be present and in which they often work together. Despite the intense emotional content, teens will warm to the authenticity apparent in every voice. Many, if not most of the essays offer a list of the techniques and treatments that have been successful in handling symptoms, including medication, therapy, exercise, and yoga. The difficulty in recognizing mental health issues, as well as the unfortunate stigma associated with asking for help, is frequently acknowledged and may help teen and adult readers work toward achieving a more open dialogue. Perhaps most importantly, the collection's overarching sentiment points toward acceptance and the idea that treatment is a journey. As contributor Tara Kelly writes: "If anxiety gets the better of me again, that's okay. I give myself permission to fall down and get back up." VERDICT A first purchase for all young adult collections.—Kristy Pasquariello, Wellesley Free Library, MA 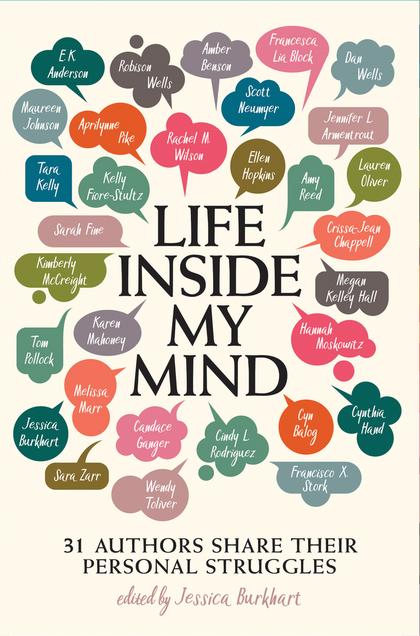